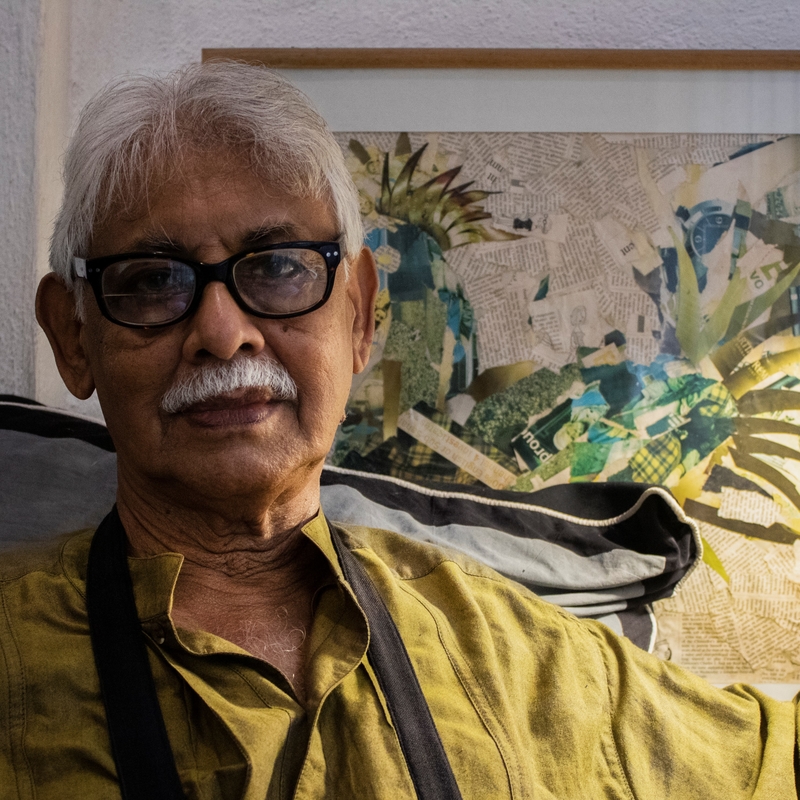 Written by esteemed architect Anura Ratnavibhushana exclusively for ARTRA’s Anniversary Edition, this thought piece titled ‘Biodiversity as Cultural Heritage’ further dissects art’s role in preserving culture and heritage while relating its significance and critical role in addressing the dire need to preserve our natural environment. Revered architect Anura Ratnavibhushana, aged 79, initially studied architecture in Sri Lanka and completed his diploma at the Royal Danish Fine Arts Academy in Copenhagen in 1969. He was an apprentice of Geoffrey Bawa and Ulrik Plesner in the 1960s. His mentor Bawa has described him as ‘first among equals’. The singular achievement of his design career is the inclusion of his own unique Lagoonside House in two separate compendiums of world architectural history. Namely the 20th century world Architecture Phidon Atlas (UK 2012) and World Architecture A Critical History (China 2000). ‘Creating Simplicity’ (v. yapa 2009) and ‘Timeless Houses’ (self-published 2014). He is a part time lecturer, educator and recommends thoughtful idleness.

ARTRA poses the question, “what is the scope of architecture in preserving art, culture and heritage?” One would prefer to rephrase it as “is there scope for architecture in preserving art, culture and heritage in Sri Lanka’s context?” The answer is an emphatic “yes.” But to convince any modernist; client, project sponsor, developer, politician or administrator requires of them a deep appreciation, knowledge and conviction of a heritage going back over some 2300 years. Initially it was the introduction of Buddhist culture and its influence based on reverence for all life forms that generated ancient public works.

Over time a societal flexibility and openness to other cultures enabled our heritage to include Hindu, Islamic, Christian and many other interesting ingredients that we now consider our pluralistic Sri Lankan culture and heritage. These traditions have bequeathed lessons applicable even today. Forces of consumerism, globalization magnified and powered by the internet and media make bewildering to sort good from bad. Our general impatience and deficit of mindfulness make us only pay lip service to the lessons of a rich heritage. We recklessly sing hosannas (or Bailas) to sustainability and progress ignoring the over arching demands of a menacing climate catastrophe.

This popular amnesia ignores the imperative for an authentic response to climate change and resource depletion affecting all on earth, including trees, plants, microorganisms, animals and planetary eco systems. By our avaricious actions industrialized mankind has caused destabilizing stresses on mother earth (GAIA concept).

The economic model followed by most countries has evolved from a belief that planet earth can be exploited for open ended growth and ‘progress’. There is also a common (arrogant) belief that the consequent adverse effects on climate change with resource depletion can be scientifically techno-fixed to enable the status quo to be enjoyed. The world population is nearing seven billion and demand for natural resources from the only home planet we have cannot satiate our unbridled greed without irreversible eco system destabilization.

Several respected independent scientists and environmentalists now feel the tipping point has being reached. All we can do they say is to humbly reset our extravagantly consumerist lifestyles to one of bare necessity and simplicity, that includes architecture, public structures and built environments and reverence for GAIA.

The New York Review of Books states – “McKibben chides man for proving himself, if only by accident to be God’s rival, “able to destroy creation,”. He adds that what we had done grips us with sadness, a sense of loss that is partly aesthetic – “because we have marred a great, mad, profligate work of art, taken a hammer to the most perfectly proportioned of sculptures”. A sensitive and provocative essay of alarm, a kind of song for the wild, a lament for its loss and a plea for its restoration.

Returning to the theme: How can architecture, arts, culture and heritage cater to the challenges of climate change? One can pose a series of questions on why? Why? Why? In order to awaken us from our slumber. Only then may we see solutions.

1.Why don’t we build four to five storey (walk-up level) buildings and create a people friendly scale in our cities. They consume less natural resources and energy to create spaces and places for people to live, work and socialize. Do we really need egotistically inspired large footprint sky scrapers that consume large quantities of materials and energy equivalent to a gang rape of our environment?

2.Why don’t planning regulations encourage and incentivise suburban town centres to develop walk up level buildings with small foot prints thus conserving property sizes for more greenery around them? After all the 18th C. towns of industrialized countries have delightful spaces and places that are people friendly and hugely popular with tourists and locals.

3.Building on stilts (leaving the soil and earth minimally disturbed) is another method of treading lightly on GAIA (Mother Earth). In Sri Lanka ancient and medieval examples such as the stilted Tampita Vihares yet exists in use. A book I authored “CREATING SIMPLICITY” (V. Yapa 2009) devotes illustrated chapters to how traditional concepts evolved an architecture in harmony with GAIA. It also illustrates new directions using modern and traditional materials. A ritualistic “Bhoomi Pooja” is still conducted prior agricultural work and construction of buildings by traditional communities in Sri Lanka. This pooja is a tribute to GAIA performed with reverence and humility.

4. Why not balance Urban Development with an urgent emphasis on Rural Development in order to preserve what is left of our Commons – Air, Soil and Water? The conventional agri-businesses could become the stewards of our Commons with their managerial, scientific and marketing knowhow for the greater benefit of farmers, provided they realize that GAIA cannot favour industrialized rape of a Commons any longer.

5.Why don’t we upgrade our extensive rail network in order to discourage migration to and land fragmentation of our overcrowded cities? Rail and bus connected Rural Hubs if sensibly planned to cater for the modern aspirations of rural folk will be healthier, happier places and even induce reverse migration from our stressful and polluted cities. In some advanced industrialized countries youth are finding hope by migrating to the countryside and engaging in non-egocentric community agri-ventures as the state caters for attractive infrastructure in those rural hubs. Sensible architecture can support this emerging concept.

6.Danish architect Ulrik Plesner who worked with Geoffrey Bawa in the 1960s returned to Sri Lanka in the 1980s decade to plan the Mahaweli Project rural settlements. He had implemented new settlements based on a set of eight principles that must be satisfied by a “good livable town.” These are explained in his 2013 memoir book “IN SITU.” This valuable legacy is now ignored and neglected.

7.During the 1980s the housing ministry also engaged in multiple pioneering housing projects in the suburbs. Some are very successful examples of good architecture and planning showing lessons which cater to people’s needs. Raddolugama, Piyagama and Mattegoda housing schemes come to mind. They form our recent heritage. Why are we ignoring these lessons and repeating ad hoc clusters of single storey houses scattered willy nilly in the countryside? They lack cultural and aesthetic charm and place making. Why not learn lessons bequeathed to us by the better examples of our recent heritage?

8.Master architect Geoffrey Bawa has intuitively followed a quiet simplicity, people friendly scale and respect for the natural landscape in his body of work.

In a rare essay about his approach Bawa mentions that what remains of heritage buildings have met the essentials of life in Sri Lanka. He adds that, although the past gives lessons it does not give the whole answer to what must be done now. He limited his coastal hotel designs to not exceed the height of surrounding coconut trees. These hotels are much admired by tourists as they do not spoil the scenic coast line and landscape which is our priceless asset.

With the completion of hotel Kandalama, Bawa demonstrated how even a five to six storey modern building could be designed to occupy a forested environment quietly. Bawa innovated a structural exo-skeleton overgrown twenty years later with wild diverse vegetation. Bawa has shown a robust new direction.

Why don’t developers try to learn from the legacy left by Bawa? Today our coast line is beginning to be rudely scarred by multi-storey hotels and condos and the trend continues inland. The current development model followed by affluent clients encourages the destruction of the eco systems at an accelerated pace while paying lip service to sustainability and lessons of heritage. Is this not ignorance?

In urban mega city developments why do we destroy our Commons, Air, Soil and Water? Can we not avoid impervious hard paving following the extensive sand or gravel public outdoor spaces seen in heritage monasteries, Buddhist and Hindu temples and church compounds.

Our Colonial heritage bequeathed us numerous buildings with ventilated interiors, high ceilings, verandas, arcades and minimal use of glass that are comfortable without energy guzzling air conditioning. The UDA engaged in conserving these heritage jewels and precincts hidden away in Colombo some seven years ago. The Dutch Hospital and Torrington Square complexes are two such splendid examples. At a residential scale the Gallery Café (architect Bawa’s former office) run by a Lankan of exceptional artistic talent is ventilated without air conditioning and is a huge success with tourists and locals. These are only a few examples in scale and quality that could cater for a resource depleted world.

There are emerging architects all over the world and in Sri Lanka who have decided to change direction from energy intensive architecture. Al Jazeera t.v. channel has a documentary series titled ‘Rebel Architecture’ that shows new sustainable ideas for a change of direction and scale. African architect Francis Kere addresses sustainability challenges through community effort in what he terms “Radically Simple” architecture. Locally architect Vijitha Basnayake for more than two decades has been exploring the reuse of salvaged materials and other methods turning his back on ego centric mega consumerist architecture.

There is scope in art, sculpture, dance and music to powerfully communicate through positive social satire and lampooning the unbearable level of pollution (plastics, noise, garbage, misuse of digital devices etc) that make urban life unbearable and unhealthy.

A small group of young artists in 2017 exhibited a series of masks based on the theme of ‘Sanniya’ (the traditional ‘thovil’ ceremonies performed to exorcise mental afflictions and obsessive psychotic behavior involving loss of contact with reality). Is it not our obsession in exploiting GAIA for a materialistic lifestyle, a form of affliction akin to a Sanniya?

As one writes down these thoughts in October 2019 the urgency for coping with the global climate change issue and resource depletion is not yet a priority with an urgent emphasis in the public agenda of most nations, including ours. Only the sun’s energy is relatively free. All other energy types and materials needed to maintain the status quo have to be extracted from GAIA. Only one planet earth exists. So there is no techno fix really! Probably only a change of lifestyle towards simplicity and selflessness in community efforts makes sense.

In conclusion, as a strong advocate of sustainability, Uchita de Zoysa urges in a backdrop of mindfulness, “let the dialogues continue.” 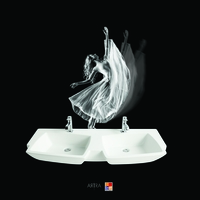 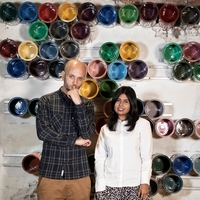 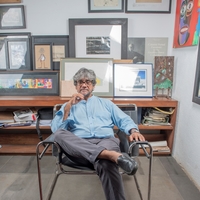 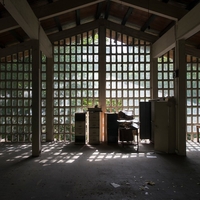 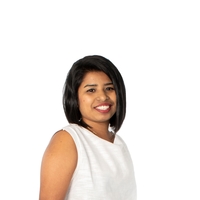 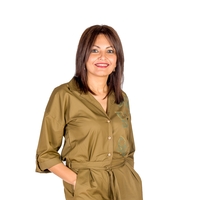 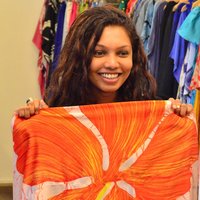 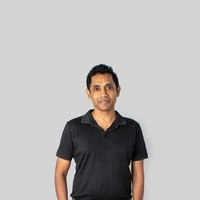 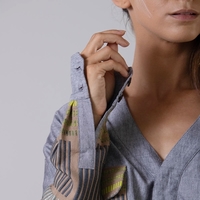 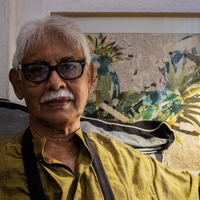 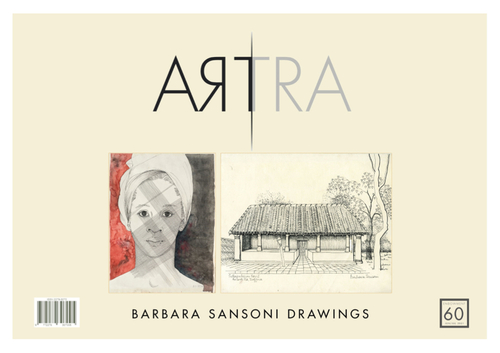